Having someone in the vehicle to keep company is always welcomed especially in long trips. They can keep you awake with light conversation, change the radio station and manage the air conditioning. This quickly turns into a real sore point if your companion tries to drive the automobile from back or passenger seat. They can quickly start getting on nerves and affect performance behind the steering wheel.

What is a Backseat Driver and Reasons?

It is a person who tries to control how a car is operated while he/she is sitting on the passenger or backseat. They keep warning and telling what to do. They ask to keep distance, slow down, check the exits and give directions. Sometimes they can take it too far as to criticize or comment on every action taken. Not many people like to have a running commentary about it and therefore it can be pretty unsettling to have such a person in a vehicle. This can quickly turn into bickering that has its own problems all together. It is easy to lose the peace within the vehicle but hard to restore it.

According to some psychotherapists the backseat drivers may be anxious about their safety. They may have seen some dangerous behaviors from the person on the steering wheel before or during this journey. Nervousness can manifest in the form of criticism and attempt to control the vehicle somehow. Sometimes, this may just be a bad habit a person is keeping. Actually, they may believe that they are helping. 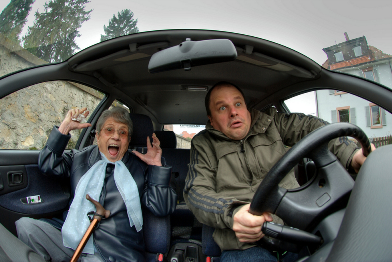 Most motorists wouldn’t want a second person in the automobile who keeps criticizing how they do and offer advises as to how to sit, steer, change gear and handle the road. These criticisms work when the motorist recognizes the authority of the person offering them and willing to accept it as if it comes from an instructor. Otherwise, he/she will be annoyed, distracted and probably argue with the person interfering.

This point has been proved by a study carried out by Carnegie Mellon University. The study carried out in virtual environment showed that drivers’ abilities have been negatively affected especially when it comes to curves. Also, according to National Highway Traffic Safety Administration talking with the motorist while you are at the backseat is a distraction. You probably knew that it isn’t cool anyway.

Distractions of any sort will reduce road concentration and increase the chance of accidents. After several accidents you can forget about cheap auto insurance and prepare for doubling premiums. You can read here how much does insurance go up after an accident? Add the pain, suffering and wasted time dealing with the claims and you will see how the costs will rise. In addition, it can strain relations even between couples who are getting along fine otherwise.

Another study carried out by insurance.com asked people who they think is the worst. There is not much surprise there that 40% of men said it was their wives and 34% of women said it was their husbands. The next group in the order was mothers. You can imagine the accusing looks and pointing fingers between spouses.

Top offences were; commenting on the speed with 47%, giving directions with 29%, talking too much with 19% and stepping on an imaginary brake with 15%. We have all seen these behaviors from our loved ones at some stage and know that it doesn’t really help our mood.

How to Handle a Backseat Driver

Signs of an anxious passenger are; keep telling to mind the truck, keep a wider distance and slow down. Losing the plot and arguing with them is not going to help anybody. How are you likely to persuade someone who probably believes to be of great help?

You need to do things that will take their mind off worries they have. You should tell or show them that you don’t need help and keep them engaged. Here are a few things you could do to reduce the interference from passengers.

Interferences come in many forms and you need to find a way to deal with them. Arguing with passengers instead of paying attention to the road in front doesn’t help. It is best that you deal with possible issues well ahead of a trip. Furthermore, don’t get worked out if someone pass a comment on your motoring skills.